10 THINGS TO DO IN PHETCHABURI

enjoy watching Bryde’s whale on a Boat ride in Amphoe Ban Laem during October-January or from the end of the rainy season onwards. Tourists will see Bryde’s whale seeking Food and emerging above the water with a wide-open mouth to feed on anchovies while a flock of seagulls are hovering nearby and waiting to swoop down to catch anchovies that try to escape from the whale. 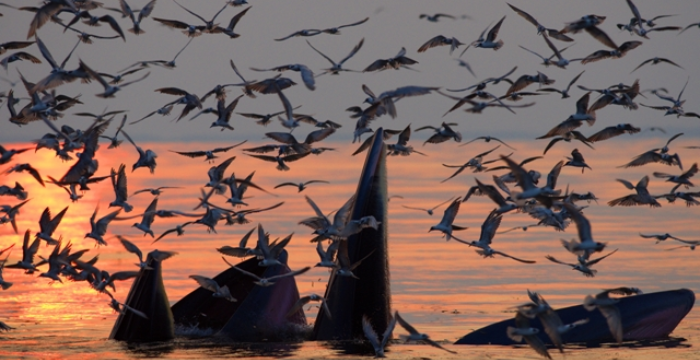 Tham Khao Luang is a Cave in a small hill that is the highest peak of only 72 metres above mean sea level. It features spectacular stalactites and stalagmites and is the most important and largest cave in Phetchaburi. Inside the cave is enshrined an important decorated Buddha image, which was built under the command of King Rama V the Great as a tribute to King Rama IV. The highlight of the cave is witnessing the stunning picture when the sunlight shines through the cave’s ceiling onto the ground below. The best time to see most of the sunlight is between 9.30 – 10.30 a.m. The sunbeam will vary by the weather conditions in each season. This cave was a place visited by King Rama IV and one of his favourites. He ordered to restore the ancient Buddha figure and build a rock staircase for accessing the cave at the entrance of the Khao Luang’s foothill. For more information, please contact the Thongchai Sub-district Administration Organisation at Tel. 0 3278 0242. 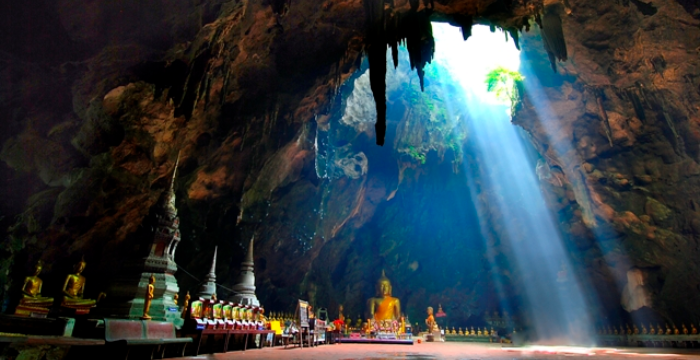 Situated on the top of three mountains, Phra Nakhon Khiri is an important ancient Monument of Phetchaburi. The highest peak stands 95 metres above mean sea level. It was formerly called “Khao Samon” by the Locals. King Rama IV commanded the construction of the Palace on this mountaintop and appointed Chao Phraya Si Suriyawong (Chuang Bunnag) who was then commander-in-chief as the supervisor in charge of the construction. The palace was completed in 1860 and royally named as “Phra Nakhon Khiri”; however, the people of Phetchaburi have called it Khao Wang until today.
Phara Nakhon Khiri consists of throne halls, pavilions, Temples and various building complexes in which most of them were built in a combination of Western neo-classical and Chinese architectural styles on the big three mountaintops as follows: On the east side at the hill shoulder is situated Wat Maha Samanaram. The temple was built in the Ayutthaya period. The murals on the four sides of the walls in the ubosot were painted by a renowned Thai artist, Khrua In Khong. On the hilltop is located Wat Phra Kaeo, as a designated temple of Phra Nakhon Khiri Palace like Wat Phra Si Rattanasatsadaram, a designated temple of the grand palace in Bangkok.
The compound of Wat Phra Kaeo comprises a small ubosot decorated with marble. Behind the ubosot is Phra Sutthasen Chedi, and the squared-based small belfry with indented corners is located at the front. On the central peak is installed Phrathat Chomphet, a 40-metre-high stupa enshrining the Buddha’s relics. From this point, visitors can admire the throne halls situated on the other two peaks including the landscape of Phetchaburi province.
On the west side is the royal residence that is the palace complex including throne halls, pavilions and buildings like other typical palace patterns as follows: Phra Thinang Phetphum Phairot, Phra Thinang  Pramot Mahaisawan, Phra Thinang Wetchayan Wichian Prasat, Phra Thinang RatchaThammasapha, Ho Chatchawan WiangChai, Ho Phiman Phetcharamahet, Phra Thinang Santhakhan Sathan, Ho Chatuwet Paritphat, and Sala Thatsana Nakkhattaruek. The palace also includes a chariot garage, a horse stable, Sala Mahatlek, Sala Luk Khun, Sala Dan, Sala Yenchai, Thim Dap Ongkharak (security guard building), and royal kitchen. The palace is surrounded by fortresses in all 4 directions; namely, Thatararot Pongpok to the east, Wirun Hok Borirak to the south, Wirupak Pongkan to the west, and Wet Suwan Raksa to the north. The Fine Arts Department used some parts of the palace on the west to establish the Phra Nakhon Khiri National museum. The Museum displays artefacts consisting of the royal articles of use of King Rama IV and King Rama V the Great, bronze and brass statues for room decorations in various throne halls, and ceramics from China, Japan and Europe.

The Phra Nakhon Khiri National Museum is open daily from 8.30 a.m. to 4.00 p.m. Admission fee: 150 Baht. To access the Historical Park, visitors can either walk or take an electric cable car (round-Trip price is 50 Baht for adults and 15 Baht for children). For more information, please call 0 3242 5600. 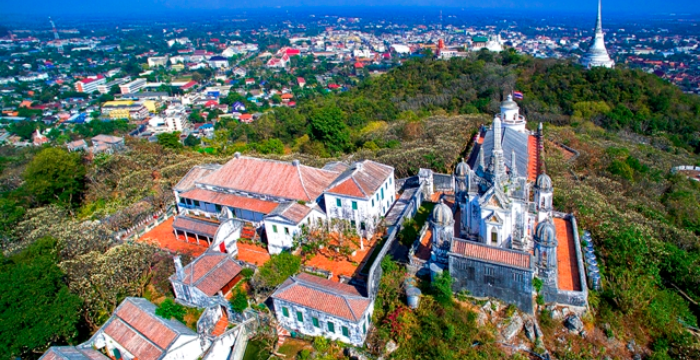 Wat Yai Suwannaram is a learning centre of History, arts and craftsmanship. The Temple compound is enhanced with ancient architecture of the Ayutthaya period; for example, a teakwood sermon hall adorned with the Kankhot pattern carved and gilded door panels that have an axe mark presumably chopped by the Burmese. The ubosot enshrines the principal Buddha image, a lifelike statue of Supreme Patriarch Taengmo, which is considered to be Thailand’s first lifelike statue, one of the Unseen Thailand - a Buddha figure having 6 fingers on the right foot, and mural paintings of the assembly of the angels aged over 300 years with a cloister encircling the ubosot. In addition, the wooden gables of the ubosot were carved into different designs with the Number 5 seal indicating that this temple was under the patronage of King Rama V the Great who donated his private fund for the restoration and upgraded it to be a royal temple. Mysteriously, there is one gable showing the Number 5 seal in reverse order; some said that it could probably mean the passing of King Rama V the Great and his not returning to this temple. For more information, please call Tel. 03241 2956, 0 3241 2714. 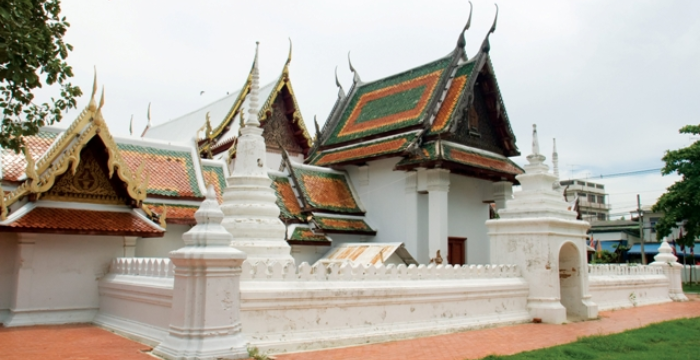 Ao Bang Tabun Estuary is the most beautiful spot of Phetchaburi for admiring the sunrise. Tourists can take a Boat ride to observe the fisherman’s way of life in Amphoe Ban Laem, Farms of cockles, mussels, and oysters, as well as see a mangrove charcoal kiln, which is a Local wisdom of the Ban Laem Villagers. 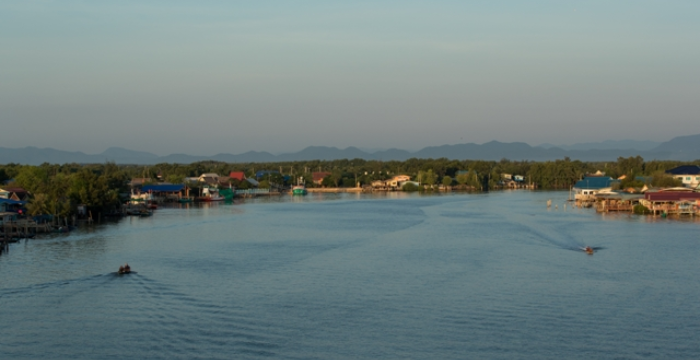 Boonthida Farm is a green caviar farm that is a place for studying and observing the large scale of green caviar or sea grapes cultivation. Tourists can learn about the steps of farming sea grapes breed, which include collecting and selecting sea grapes, as well as cleaning them before delivery to the market. Green caviar is enriched with vitamins, has low calories and high fibre that is suitable for people who are on a diet. It also has antioxidants that can slow the decay of cells in the body. The Farm offers a demonstration of making easy menus from sea grapes that tourists can taste. For further information, please call Tel. 0 9796 6465.

The exterior of the stupa is decorated with the stucco design of the School of Mueang Phet artisans that illustrates the uniqueness of the art of Phetchaburi. The interior of the stupa houses Phra Phuttha Setthi Ming Mongkhon, Phra Phuttha Setthi Nawakot and Phra Siwali Mahalap Romyen and is enhanced with mural paintings and delicate woodcarvings on the door panels and windows. On the top of the Prathat is enshrined the Buddha’s relics. For more information, please call Tel. 0 3254 5204. 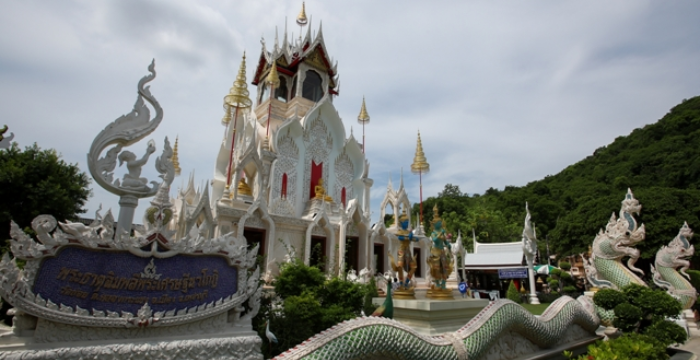 Ban Tham Suea Community is a tourism Village in which tourists can learn how to participate in the Tree Bank project by growing plants according to King Rama IX’s initiative of “3 kinds of foresting giving 4 benefits”, which covers the matter of people’s living, economy and ecosystem. People in the community are encouraged to have a part in natural conservation. The trees that have been grown will be deposited with the Bank of Agriculture and Cooperatives (BAAC). Villagers can use the trees as collateral for a loan at half the value of the trees deposited with the Bank. Tourists can join the activity of making seed balls and shooting a slingshot of seed balls to plant them in the forest in the area of Ban Tham Suea, as well as try making Thai dessert, Khanom Thong Muan that is a well-known Souvenir of the village. Fruit orchards of rambutan, durian, and mangosteen can also be seen. For more information, please call Tel. 08 2918 7774.

The Hot Spring has been developed and supervised by the community. It provides a hot mineral pond, which is piped from the origin source located a bit further. The original source is accessible on foot. The water temperature is about 49 degrees Celsius. This place provides a massage parlour, separate mineral bathing rooms for men and women including a Restaurant.

Namtok Kwangchow Floating Market is located in the Namtok Kwangchow Park (or Namtok Kwangchon), Amphoe Nong Ya Plong. The waterfall features different layers; namely, Pha-ngam, Pha Pratu Lueat, Hin search-result/tagword/Dam">Dam, and Dong Montha. In particular, the Hin Dam layer consists of a lot of mineral rocks that are rare in Thailand. The name of the park and waterfall are similar to the name of the City in China of which the former name was Huai Kwang Krachon; however, the name was changed to make it more attractive. The Floating Market is open on the weekend and public holidays. Most of the products are fruit, vegetables, and rare Food; for example, steamed fish curry (Ho Mok) in a bamboo tube. Tourists should not miss the fish spa or spa therapy that is the first foot spa located in the middle of forest surrounded by nature, the stream and River. In addition, the waterfall area is a spot to see fireflies at nighttime, and one of the country’s viewpoints that stars can be clearly seen. It is open on weekends and public holidays between 9.30 a.m. - 5.00 p.m. Admission fee: 20 Baht. Tel. 08 1832 2608, 08 4540 3425; website: www.kwangchowwaterfall-resort.com. 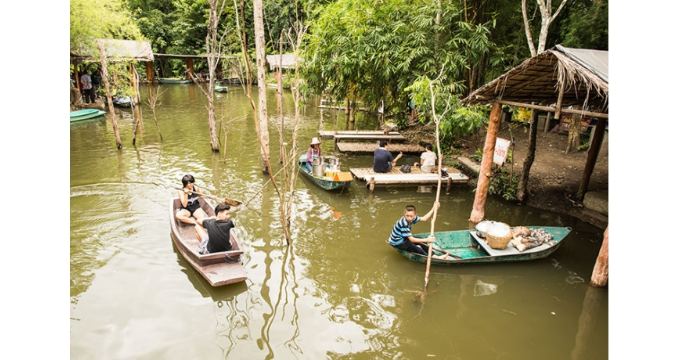